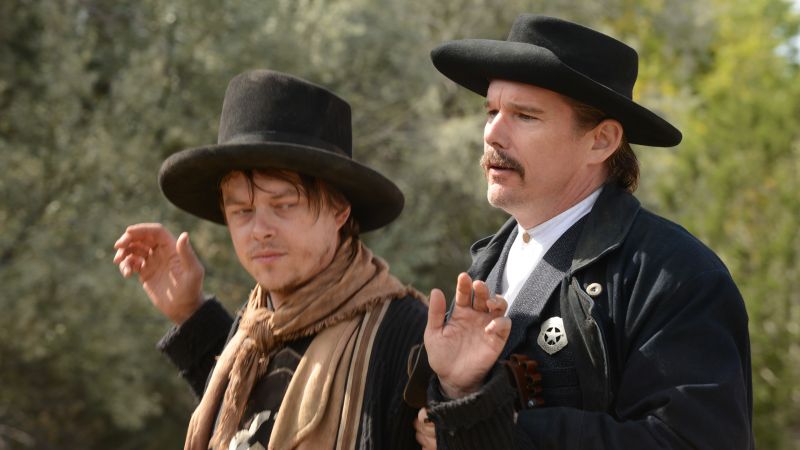 Dane DeHaan, left, and Ethan Hawke in the movie “The Kid.” (Lionsgate)

Legendary Old West lawman Pat Garrett and his famed nemesis, outlaw-folk hero William H. Bonney, a.k.a. Billy the Kid, have been portrayed countless times in films and TV shows (Arthur Penn’s 1958 film debut, “The Left Handed Gun,” and 1973’s beleaguered Sam Peckinpah picture, “Pat Garrett and Billy the Kid,” are top of mind), so there’s a high bar for a new or original way in to telling their tale.

It’s a challenge that has been impressively met by screenwriter Andrew Lanham and actor-director Vincent D’Onofrio (they share story credit) in the solid western drama “The Kid,” whose title, generic as it may be, contains a dual meaning key to what sets this outing apart.

Melding fact and fiction, this absorbing, well-structured and superbly acted movie, is told largely through the eyes of a 14-year-old kid named Rio (Jake Schur, in an auspicious screen debut), who flees home with his older sister, Sara (Leila George, D’Onofrio’s daughter with Greta Scacchi), after killing their abusive, murderous father and injuring their bandit uncle, Grant (Chris Pratt), in self-defense.

En route to Santa Fe in search of their late mother’s friend, Rio and Sara, who have agreed to keep the patricide secret to protect themselves from the dubious and the vengeful, encounter both Pat Garrett (Ethan Hawke), the principled, no-nonsense new sheriff of Lincoln County, N.M., (and onetime buffalo hunter), and Garrett’s prey, Billy the Kid.

Rio, a quietly scrappy sure-shot, soon finds himself aligned with the protective, instructive Garrett, yet also awed by the charismatic Billy (Dane DeHaan), whom Garrett has captured.

And it’s in this unwitting battle for a boy’s developing moral compass that the film finds its unique thematic footing and emotional heft as Rio sets out to decide what kind of man he would like to become.

But it’s hardly a simple choice between good and bad or right and wrong as Rio, perhaps in the seminal light of being forced to kill his own father, has begun to understand that sometimes the direst actions — on either side of the law — are never as clear-cut as they may appear. So although Rio’s maturing head may side with the upright Garrett, his more free-spirited heart is clearly enticed by Billy.

That Lanham has drawn both Garrett and Billy with such compelling dimension helps make Rio’s dual loyalties that much more credible — and relatable: The sheriff’s noble, at times philosophical bent is balanced by his steely, “a man’s gotta do what a man’s gotta do”-style of law and order, while Billy is, by turns, showy and thoughtful, gutsy and vulnerable, with a unique sense of decency (at least when it comes to Rio).

Events take a mettle-testing turn for Rio, as well as for Sara, once they reach Santa Fe, and several unwelcome surprises are in store. How Rio rises to this inauspicious occasion says much about the man he’s destined to be as well as what he’s learned — for better and for worse — from Garrett and Billy, all in the wake of that pair’s inevitable final showdown.

Action scenes in this New Mexico-shot movie are plentiful and well-staged, with D’Onofrio, who appears in a small role as another tough sheriff, largely keeping the tension high and, apart from a brief midpoint lull, the pace propulsive.

So often, good things happen when one actor directs other actors, and “The Kid” is a prime example of that, with the talented DeHaan slipping into the slippery Billy with electrifying results and a fairly unrecognizable Pratt turning his good-guy image on its ear as the odious and violent Grant. (His late-breaking speech involving, of all things, bluebirds, is pretty awesome.)

As for Hawke, after a truly remarkable, three-year run of diverse film performances — including in “Born to Be Blue,” “Maudie,” “First Reformed” and “Juliet, Naked” — he seems like he could nail just about any role, whoever’s guiding him, though he definitely mines some special colors under D’Onofrio’s steady hand. (The director co-starred with Hawke and Pratt in another western, the 2016 remake of “The Magnificent Seven.”)

Garrett proves a hand-in-glove fit for Hawke, and he’s a knockout in the part, delivering such memorable lines as “It doesn’t matter what’s true; it matters the story they tell when you’re gone” and “Y’know what it means when they stop writing about you, don’t you? It means you’re already dead” like they were the last words his character might ever impart. And the West being as wild as it was back then, they just might have been.

Rated: R, for violence and language